So last month we covered some potential trade targets for New England fans to mull over during the awkward month and a half in between the Super Bowl and the beginning of the 2020 league year.

There are reports that there is a bottle neck of transactions building up just waiting for the results of the new CBA negotiations. Which is all to say that the listings of available free agents is very likely to drastically change between now and March 16th when the “legal” tampering period opens up.

In spite of that, I’m about to jump the gun and toss out some names for you. My wife can certainly verify that I’m not one to hold out.

Once we get through this, we’ll also run down (in a separate, yet to be written post) the Patriots free agents, and whom to expect back, before ending with another write up in this series, “Outlining where the Pats should go this off season”.

So we’ll go through 30 potential targets with a quick blurb on each target.

Think of it as Teddy Bridgewater redeeming himself as Drew Brees’ understudy 2.0. Mariota should be available cheap, and could be the beneficiary of a change of scenery. The team should know early if Brady is leaving. If so plan B may be to bring in several options and see how it plays out. Mariota, Stidham, and a 2020 draft pick could well be the QB room.

The Watt family has certainly had their fair share of success. Its expected that James Develin will be back, though there have been some reports hypothesizing that he may hang up his cleats. Regardless, I expect someone to be brought in as insurance/competition.

Another fullback, Ham has some chops as a receiver out of the backfield, and the Vikings running game was certainly a force to be reckoned with. Old enough to be a veteran, but young enough to have some tread left on the tires.

A smallish, quick twitch receiver, he’s not the all pro savior fans are clamoring for, but he’d be a nice piece of the puzzle, for those old enough to remember the beginning of the dynasty, he could have a David Patten like impact.

Cobb was a guy that showed up on You’re Ducking Right a year ago as someone who could help bolster the offense, and he did nothing to change minds during his season in Dallas. His familiarity with both the Cowboys locker room, and Mike McCarthy will likely lend him to having value to Dallas, but if they re-sign Cooper and Prescott, they may not have much money to toss at him. 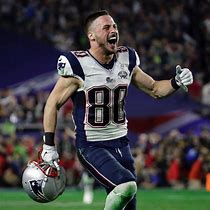 This would be a popular choice. Again, not a stud, but he is solid, he has the trust of Brady, and as a 5th receiver, you could do worse. Given the choice of Amendola, or bringing back Phillip Dorsett, this SHOULD be a no-brainer.

The Pats love to bring in former first round picks who maybe didn’t live up to the hype elsewhere to see what they can get out of them (Phillip Dorsett, and Corey Coleman come to mind in recent years at the Wide Receiver position). He does have some versatility and gadget play prowess, but they also just acquired mid season a better version of him in Mo Sanu.

Higgins has flashed some talent, but has spent his entire young career in Cleveland. There he went from an offense with no talent and no direction to then playing behind Jarvis Landry and Odell Beckham Jr (where they had plenty of talent, and still no direction). Its important to remember that its a 90 man camp roster, so don’t be surprised to see a shotgun attempt with 7-8 viable receivers coming into camp, and let competition/attrition sort things out.

Latimer has some special teams skills. He’s not a Matthew Slater, Nate Ebner, or Justin Bethel level special teams guy, but he also possesses more value away from ST then those guys. We all know that Belichick values these guys more than most. Though he may be a guy that new Giants coach, and former Patriots Special Teams Coordinator Joe Judge wants to retain.

The diminutive receiver spent last year in Arizona after starting out with Carolina. In the wide open Cardinals system he managed to catch 35 balls and is quick twitchy enough to get some separation.

Sort of the forgotten man in Kansas City as he doesn’t get too many balls thrown his way with Tyreek Hill, Sammy Watkins, and Travis Kelce receiving the bulk of the targets. With the emergence of Mercole Hardman, it doesn’t seem likely that Kansas City will extend itself financially to sign him. It feels like Robbie Anderson is going to get a significant amount more than Robinson on the open market, but I’d be willing to bet Robinson ends up being the better signing for someone.

This would be a homecoming of sorts for the former Massachusetts Minuteman standout. Sharpe was someone who received a lot of mention as a potential draft target 4 years ago. A solid possession receiver, he’s someone who should at least get a phone call from Nick Caserio.

A restricted free agent, it’ll be interesting to see what kind of tender Bourne receives. He’s never eclipsed 500 yards in his young career, but has shown some flashes. Acquiring him would be an underrated move that could provide big dividends. The important thing to remember with player acquisition is that you’re more interested in the player a guy WILL be, not so much what he WAS.

When healthy, which has become an exceptionally rare instance of late for Reed, he is one of the top receiving tight ends in football without question. More of a move tight end in the mold of Aaron Hernandez. If you sign Reed, its as PART of the attempt to bolster the tight end position. You don’t count on him, but if he is there, he makes your offense better. Wherever he ends up expect a low base salary with significant games played incentives.

Not AS brittle as Reed, Eifert isn’t exactly Mr. Dependability himself. It wasn’t that long ago that Eifert was hearing his name amongst the upper echelon of league tight ends. Also the same as Reed, if you sign Eifert, you better also better be bringing in someone else to go with him. The former Fighting Irish star has been a popular name for Patriots fans the last couple of years. 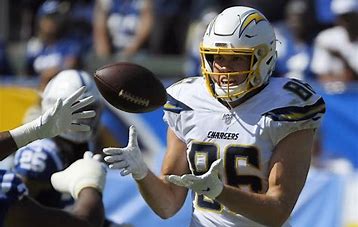 If the Chargers don’t franchise tag Henry (which I think they ought to), and he hits the open market, he ABSOLUTELY ought to be the Patriots number one priority outside of the organization. A capable blocker, good receiver, he was emerging as a potential star before injuries slowed his progress. He’s not Gronk, but he’s easily the best viable option (Greg Kittle isn’t walking through that door) to replace him, aside from the man himself coming back.

This isn’t a flash move, but Seals-Jones is the type of guy you bring in for short money as insurance when you sign a Jordan Reed or Tyler Eifert. He’s good enough that he’s usable if you need to, but not so good that you want to have to use him.

The former Detroit Lion would be a slightly cheaper replacement if Joe Thuney leaves which is anticipated. Its uncertain how much Hjolte Froholdt developed this season, and with the O-Line whisperer Dante Scharnecchia retiring, bringing in a more established player may not be the worst thing.

The Chiefs defense showed marked improvement this last season, and Ogbah was part of that solution. Not a premium pass rusher, he’s the type of solid vet that the team has brought in recently (think Adrian Clayborn or Jabaal Sheard).

Snacks Harrison simply outpriced himself from the Lions. A stout force in the middle of the line he could be a viable option if the younger Danny Shelton prices himself out of New England.

Allen got his payday when he left the Eagles to head south for Florida. He’s had some difficulty with injuries in Tampa Bay but would be a solid veteran addition to help bolster the interior of the line.

With a new coaching staff, they may lean towards retaining the younger option and letting Gerald McCoy and Dontarie Poe go. But if they don’t the former first rounder is the type of young player with unfulfilled potential that the Patriots have sought for years. A Butler-Butler DT combo would be fun as well, and we all know what kind of fun loving guy Belichick is.

The young former Alabama stud feels like the type of guy the Lions should be building around. But they’re the Lions for a reason. Coming from Matt Patricia’s system could make the transition easier for Robinson if he came to New England. Then again the same could be said for going to South Beach where they have seemingly limitless cap space.

Billings is the type of low budget, ho hum move that the team has made for years that turns out to have tremendous value. Nobody batted an eye when Lawrence Guy was brought in, but where would they be without him now?

It feels like Lynch has been around forever. Except he’s still only 26 and has 20 career sacks. On the cusp of being really good for a while now, if he can get gotten on a reasonable deal he could really help enhance the pass rush

A former second rounder for the Jets, Lee has been plagued by injuries and by bouncing in and out of systems. He still possesses the talent that made him a high round pick. With Van Noy, and Roberts both free agents, and Hightower starting to get up there in age (for a backer with his injury history), it wouldn’t be a bad signing to get Lee in. 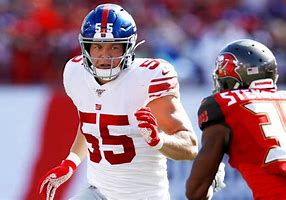 The former UMaine star was drafted by the Panthers and started the 2019 league year with the 49ers before eventually landing in the Meadowlands where he blossomed. 80 tackles and 2 sacks aren’t eye popping numbers, but they have the young backer on the upswing. Add his solid work as a backer to his skills on special teams and he for sure could find a fit in Foxborough.

A depth signing, the former Steeler would make any headlines or waves if he came to New England, but he’d certainly provide a layer of depth. And while the Steelers and Patriots defensive systems are not identical, how they’ve traditionally used their linebackers is very similar.

Jefferson was a target when he was previously on the market following his departure from Arizona. His release from Baltimore had more to do with cap space positioning than it did with Jefferson’s performance. If McCourty (free agent), Chung (potential cap casualty and possible suspension), Harmon (likely safe), and Brooks (likely safe) are all back, then Jefferson isn’t likely needed, it also wouldn’t shock if McCourty and/or Chung aren’t back in 2020.

As previously stated, the safety position is one for the Patriots that is potentially in flux. Certainly its a position that could use an injection of youth and a draft selection being used here is a possibility. But you don’t want to get too young. If McCourty and Chung are both gone, a vet addition like Sandejo would make sense.