Following the trade that sent Russell Westbrook to Houston and saw Chris Paul’s return to Oklahoma City (recall he spent a year in OKC as a Hornet following hurricane Katrina) the public opinion seemingly went overboard in their negative assessment of Chris Paul.

Certainly his production has declined as he’s gotten older, and he hasn’t played a full season since 2014-2015. In his 2 seasons as a Rocket he managed to be on the floor for 58 games each season, not including playoffs. His per game scoring average was the lowest of his career at 15.6 ppg. But he is still one of the best floor generals in the game. A presence on the floor that outshines his stats. In a seven game playoff series there aren’t many point guards that would be selected before him, even at this age. If you ignore his contract (which obviously is a major issue) then any team in the league would gladly add him.

When support for CP3 was shown, it was pointed out that he has the worst contract in the league by a twitter follower: 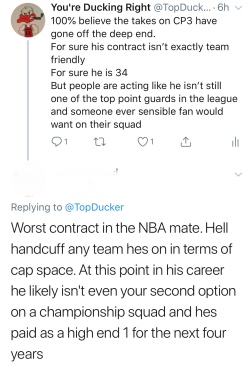 Not one to use hyperbole lightly I reviewed to see if this follower of @TopDucker (and if you’re not a follower already, why the hell not?!) was correct in his assessment. I went through all 30 teams and their contracts.

I eliminated anyone with one year left on their deal (looking at you Chandler Parsons, Evan Tuner, Allen Crabbe… while we’re talking about those three, can we pause for a moment to admire what the Hawks are building? If they renounce their free agents, those bad contracts, then the Hawks would have room for 2 max contracts next off season, and that would be on top of Trae Young, John Collins, Cam Reddish, De’Andre Hunter, Kevin Huerter, Jabari Parker, and Bruno Fernando)

I did not take into account recent poor performance, meaning, the fact that Gordon Hayward clearly has not lived up to his contract is a concern moving forward only in how it could effect his future production. The only concern is what it is anticipated he does over the remaining portion of his contract (which at this point is a 1 year deal, with a player option on the second).

That being said, we’ve come up with what was deemed the top 10 worst contracts in the NBA. To be very clear, these are not bad players, these are bad contracts. In a free market, a player’s value is what teams will pay him. So this is in no way disparaging to the player, get yo $$$, dolla dolla bill yall.

Of the 10 contracts, 4 of them have been consummated just this month. So lets take a look, is Chris Paul’s contract the worst in the league? (dollar amounts are approximate)

The talented Spaniard has never been a particularly gifted scorer, but has always been an exceptionally talented play maker. His value will be in freeing up Devon Booker to play off the ball and use his natural scoring abilities. To find Mikal Bridges, and to get DeAndre Ayton the ball on the block. The question isn’t in his abilities, its in the $17 million a year that he’s due to be paid.

Joseph’s value apparently lies in his locker room presence. He certainly is no threat to unseat De’Aron Fox as the Kings’ lead guard. The question is, do you pay your back up point guard $12.3 million a year? Especially one that isn’t a gifted shooter who would seamlessly blend into a two point guard line up, someone like Seth Curry? This isn’t paying for potential, or future production, at this point after 8 seasons, he is what he is. He is a career 32.7% 3 point shooter who has never averaged double digits in points in a season, or more than 4 assists a game. All in all, a bad contract.

Porter’s contract was a result of the Wizards not willing to cut bait on the player they had invested time and money into. The fact that he’s now on the Bulls is the result of realizing their error. Potentially Porter fills a gap in their line up over the next couple of seasons, and his contract will come off the books at a time they’re ready to actually do something. Essentially he is a more expensive version of what they hoped to get out of Denzel Valentine. Porter is by no means a scrub, be he sure as hell isn’t worth the 4 year $106 million deal he got.

When Batum hit the free agent market in 2016 it was thought that he was entering his prime and could be a poor man’s Kevin Durant (VERY POOR MAN), a lengthy forward capable of scoring inside and out, of defending multiple positions. Its an assumption, or belief that has gotten more than one mediocre forward PAID (looking at you Jeff Green). In this case, it was for 5 years, $120 million, of which 2 years and $53 million remain. Batum would be a very nice 3rd guy, or ideally, 4th. What he isn’t is worth $26.5 million a year for the next 2 seasons.

There will be no Horford hate here. Al’s value has long gone well beyond the traditional NBA stats like points, rebounds, and assists. He is an outstanding team defender and floor general on both ends. And in this first season when he’s due to be paid $28 million, he’ll probably provide commiserate value. But in year four, as a 36 year old with bad knees its hard to see how this will be a good deal. Especially when you consider that the 76ers will be paying BANK to Ben Simmons, Joel Embiid, and Tobias Harris at the same time. If you’re going to have a Golden State Warriors type payroll, you’re going to expect Golden State Warriors type results.

Never a 20 point scorer with the Cavs, that is mostly a result of being the 3 wheel on Lebron and Kyrie’s date night. But 2017-2018 saw Love put in the position of being “The Man” again, a role that he produced in as a younger man in Minnesota. Due to health, he only managed to get into 22 games, averaging 17 points and just under 11 rebounds a game. And while its entirely possible that he could return to his 20/10 stature this season, it also feels entirely possible that the player who has been injury prone throughout his career will continue to be injury prone, and will see a decline in his production as he ages rapdily. Regardless though, for a rebuilding team like the Cavs, this contract makes no sense. Its a gamble that they win only if he appears healthy enough for them to flip this contract to a contender for future assets.

Tobias has shown himself to be a capable player, a borderline all star in most seasons. And again, a player is worth what he can get on the market, so good for him. But at his best Harris has never been considered a player who could be the best player on a legitimate contender. In Philly he won’t be asked to be the best player, but he’ll be paid like he is. So while Harris isn’t a bad player, its a bad deal.

We won’t beat this horse to death, the pros and cons of Chris Paul were already touched upon. And while for sure his contract is a bit of an albatross at this point, out of a league with 450 roster spots, there were 2 contracts that have deemed worse.

On the surface it doesn’t look THAT bad. A player entering what should be his prime whose career scoring average is just a smidge below 20 points a game. But he’s shown zero propensity to play defense, in spite of the physical talents should make him an outstanding defender. He’s clashed with and run off a teammate and coach (Jimmy Butler and Thibs) who were battle tested and put winning above all else. And he just has the feel of a player who will forever put up hollow stats on non playoff teams.

Wall’s contract is easily the worst in the league. Wizard’s owner Ted Leonsis was quoted as saying he didn’t expect to see Wall play during the 2019-2020 season. So obviously that is a big strike against him. Another strike is that he has a giant contract on what should be a pretty damn awful squad. So you’re paying such a large amount for a player to not be in the playoffs. But the biggest thing is that when the contract ends he’ll be 32 years old, which now a days isn’t the end of the world for an NBA player, but Wall was never the most skilled point guard (not to say that he was without skill). He relied very heavily upon being the more athletically gifted, quicker player in any match up he had. As he ages, coming off back to back major injuries (a left heel injury that sidelined him for 7 months, followed shortly there after by an Achilles tear), it can’t reasonably be expected that the same physically gifted Wall will show himself. Which is all to say it is very likely that Wall will come back looking like Derrick Rose did following his injuries. Certainly Rose has bounced back to carve out a nice second act to his career, but Wall will be older when he attempts it, and Rose didn’t do it while playing on a rare NBA Super-Max contract.