Less than a month away from tip off, we’re coming into the cream of the crop section of the rankings. You’ll see some “controversial” rankings, especially with concern to some of the fantastic point guards in the league. You’ll see more than 1 Raptor and more than a couple of Huskies, of all kinds.

Bradley Beal, number 40 with a bullet! Last season was the first of 5 seasons were Beal didn’t miss a decent chunk of games due to injury. He responded by averaging a shade over 23 points a game while shooting just above 40% from 3. A more than reliable Robin to John Wall’s Batman, if Beal can stay on the court he is one of the top back court scorers in the league. 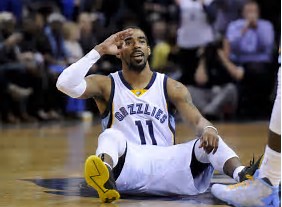 The young (he’ll still be nursing a b-day hangover when the season tips off following his 30th birthday) star of the Grizzlies responded to being the highest paid player in the NBA with his best season yet. Once overshadowed by high school, AAU, and college teammate Greg Oden, Conley is finally emerging into the spotlight. Upping his 3 point attempts by more than 2 a game helped Conley set a new career high in points per game. 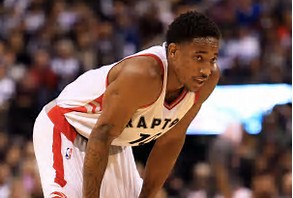 The modern day Rip Hamilton, a marksman shooter who is seemingly averse to using the 3 point shot as a deadly weapon. The 6’7” wing shot just under 27% from 3, while hoisting less than 2 a game. While shooting a blistering (for a perimeter player) 48% from inside the arc, DeRozan set a career high with his 27.3 point per game average. With the gang pretty much all back together in Toronto, there is no reason to expect a drop off from the man coming straight outa Compton.

The ugly duckingly who bloomed late, Lowry was a first round pick of the Grizzlies coming out of Villanova, it took his second team, the Rockets, before Lowry found a groove in the NBA, and it was his third team, the Raptors where he found his ticket to stardom. His scoring average has steadily increased, as has his 3 point proficiency, not a coincidence. After seeking greener pastures Lowry was seemingly forced to take a shorter deal with the Raptors in order to cash in with a respectable per year financial average.

A ranking this high for Thomas for next season is either gonna be spot on or WAY too high, like Snoop Dogg hanging with Willie Nelson at Tommy Chong’s house high. Thomas will be back on the court this season, the question is when, and how healthy will he be? Being regulated to an off the ball scorer (which everyone who plays with Lebron becomes) should benefit Thomas, especially as age and injury play a role in his future. 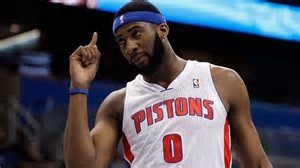 Drummond this high was a tough call as you can’t realistically have a guy on the floor at the end of games when he shoots less than 39% from the line. But I’m just a sucker for a guy who cleans the glass like a janitor with OCD. Lost in the shuffle is that Drummond just turned 24 and still has plenty of time to continue his development. My rather ample gut says he takes another solid step forward this season.

Having never averaged a double double, nor eclipsing the 20 point per game mark, the undersized former Louisiana Tech forward is a more than solid all around player capable of exploding at any time. His expanding offensive game will fit in nicely with the Denver Nuggets, as will his veteran presence in the young locker room. Denver getting his John Hancock on a contract was one of the off season’s key moves. 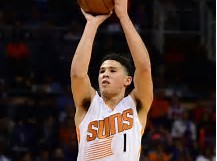 A volume scorer the young former Kentucky Wildcat has already established himself as one of the premier players in the league, averaging over 22 points a game before he can even legally have a drink. Assuming (and there is no reason to think he won’t) he can raise his shooting averages to reflect his prodigious abilities, as well as improve the overall scope of his game (defense, rebounding, passing), it won’t be long until Booker is counted among the superstars of the modern NBA.

The key cog in what could be a surprisingly solid squad, Walker has shown himself to be a winner dating back to his days in Storrs. Reaching career highs across the board last season in all the major shooting percentages, while also setting a new bar for personal scoring averages, Kemba doesn’t receive the attention that some of the other point guards around the league receive, and that lack of attention is baffling. The addition of Malik Monk may finally be the key to relieving some of the pressure on Walker on the perimeter, allowing him to flourish even more.

With just 30 players left (an average of 1 per NBA squad) we’ll breeze through the rest of the list by the end of the weekend as we ramp up getting ready for the tip off in a few weeks. So keep a look out for additional chapters as you watch grid iron bouts the next couple of days.