The banner had been revealed, Roger Goodell had been booed off the field, and crazy train was still echoing around Foxborough when the Patriots systematically marched down the field to take a quick 7-0 lead to open the 2017 NFL season.

On the ensuing Kansas City possession, third round pick Kareem Hunt out of Toledo coughed the ball up on his first touch. Those first few minutes were the film negative of how the remaining portion of the game unfurled. The end result of which was what felt like the 2014 pounding that jumpstarted the run for the Patriots’ 4 Lombardi Trophy.

New England had opportunities, but could never pull away from the Chiefs, the offense getting stymied on two big fourth and inches attempts, missing on several deep throws, and generally lacking the tempo and cohesiveness Patriots nation has grown accustomed too.

The good news is that while Bill Belichick preaches the mantra of one game at a time, he is always building the team, both in layering the depth of personnel, and schematically to be better in November, and at its best in December into January. I would not expect a Chiefs 42-27 victory should these two teams meet in the post season. Then again, I sure didn’t expect it this evening.

The bad news is that he (Belichick and the coaching staff) has some work to do in front of him. The starting offensive line returns intact, and the running game looked to be the peer of anything seen last year. Some of the faces may be different, but its not unreasonable to say the results gotten from Mike Gillislee were comparable to what was gotten out of LeGarrette Blount. Rex Burkhead, while not a star of tonight’s game, was certainly not the reason they lost, and James White did James White things. Certainly a drop off from his last performance, the performance that ought to have gotten him named MVP of Superbowl 51 (Brady took home the award), it was on par with an average game seen from White. Dion Lewis had only a token roll in the offense, while also cameoing as the primary kick returner. It seems evident that Lewis’ workload is being monitored as history has shown that while he can be an electric player, his body isn’t capable of surviving a full slate of NFL games. As a side note, tonight was the first game Lewis has played as a Patriot where he ended up on the losing side of the scoreboard.

One area we won’t call a concern, but will instead use a corporate buzz word, so one area of opportunity is in the passing game. The loss of Julian Edelman was fairly evident from the get go, but became glaring once Danny Amendola went down with what is presumed to be a concussion. With Amendola out, and Malcolm Mitchell having been placed on the IR earlier in the day Brady was left looking at new comer Brandin Cooks, Chris Hogan, and Philip Dorsett who had been around less than a business week as his only receivers.

Used to being able to move the chains by pounding the underneath timing routes with Edelman and Amendola, Brady was forced to attempting to go over the top to Cooks and Dorsett, two very talented receivers, but receivers with whom Brady is still building a rapport with. In Dorsett’s case its very doubtful he was confident in running a full route tree yet.

All that being said, the offense still put up 27 points, a far cry from abysmal. Just not the well oiled machine New England is comfortable with, and also a far cry from where the system will be when Thanksgiving rolls around.

Defensively, the loss of Dont’a Hightower revealed a glaring weakness in his absence. Given time to game plan properly Matt Patricia certainly is capable of masking the lack of Hightower, there are worse linebacker groupings than the potential Elandon Roberts- David Harris- Kyle Van Noy trio, but Hightower is the heart of the Pats’ front seven. Additionally his versatility in being to be a stand up inside backer, to stand up and hold the edge, and also being able to put his hand in the dirt and pin his ears back is something they can’t replace with just one player.

Trey Flowers continued to show that he is an ascending player in the league, and Dietrich Wise showed flashes in his debut. Tonight was not an outstanding game for the trio of men assigned to plug the middle. Malcom Brown, Alan Branch, and Adam Butler are capable of performing significantly better than they did tonight, a return to health by last year’s third round pick Vincent Valentine will certainly help the rotation inside.

The defensive backfield was expected to be the strength of the Patriots’ defense this year. New comer Stephon Gilmore got torched during what appeared to be a miscommunication on a coverage assignment when Tyreek Hill was allowed to waltz into the end zone untouched. On the other side, the hero of Superbowl 49 Malcolm Butler was called on a costly defensive pass interference in the end zone. More will be needed and expected from the duo next week when they travel south to face off against Michael Thomas, and speedster Ted Ginn Jr.

One of the lone bright spots on defense was the play of safety Devin McCourty. In the same way that Brandon LaFell’s toughness shone through in 2014 when the Chiefs took the Patriots back behind the woodshed and whooped their asses, so too did Devin McCourty’s in the waning minutes of the 4th quarter. While it seemed evident that the Patriots were in the throws of accepting defeat, McCourty was still out there delivering some punishment to anyone in range with the ball.

First off, let me say, congrats to Andy Reid, while not in danger of being called skinny, it was evident that Reid had managed to avoid any all you can eat ribs specials in Kansas City (do such a thing exist? I don’t know, I’m spit balling here). That time away from the dinner table was apparently spent watching film and preparing for the season opener as the Chiefs certainly came ready to play.

I will not pretend to say that I’ve watched every game of Smith’s pro career between the 49ers and Chiefs, but tonight was by far…. BY VERY FAR, the best game I’ve ever seen him play. Hitting the deep ball, mixing some short shovel passes, and moving within the pocket well all evening. 28/35, with 368 yards and 4 touchdowns is a damn good game for anyone, let alone a guy probably not owned in the majority of fantasy football leagues, and if owned, certainly not started.

Travis Kelce’s contributions were mostly limited by the attention he was given by the Pats’ defense, but when he was able to get his hands on the ball, he was a difference maker. Receiver Tyreek Hill also showed that is capable of being more than just a swiss army knife weapon, but could be an electric receiver in his own right before falling victim to some leg cramping.

On the defensive side of the ball, the Chiefs didn’t put a whole lot of pressure on Brady until the last couple of series of the 4th, but their coverage was outstanding. As much attention and accolades that Eric Berry and Marcus Peters will receive, the guy who stood out to me was Terrence Mitchell. While he did get tagged for some penalties, it was his aggressive play in the secondary that stood out to me as one of the primary reasons Brady had difficulty finding his mojo. Berry going down with what looked to be an Achilles injury is a situation that bares monitoring. While Mitchell out performed my level of expectation of him, Berry was right on par. The difference is the bar for Berry is set very very high, like Willy Nelson hanging out with Snoop Dogg high. Instrumental in taking away Gronkowski all night, the loss of Berry long term would be disastrous for the Chiefs defense moving forward.

All that being said, the absolute star of the night was rookie Kareem Hunt. The player that ESPN’s Matthew Berry has been touting as his Ride or Die guy, and even before Berry announced his man crush on Hunt, our own Ducker Slim Mex was writing love sonnets professing his love for the young running back. 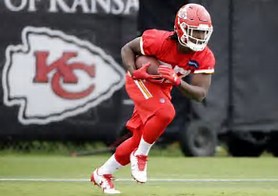 Starting out his career in what at the time must have felt like the worst way possible, by fumbling on his first touch of the football, all Hunt did afterwards was set the new NFL record for most yards from scrimmage by a player making his debut. Totaling 246 yards combined rushing and receiving on 23 touches, he tossed in 3 touchdowns as an added bonus. Fantasy owners had reason for concern as the first quarter drew to a close. In addition to his first touch being a fumble, it was also Chicandrick West, not Kareem Hunt on the field around the goal line when Alex Smith found back up tight end Demetrius Harris for Kansas City’s first touchdown. If there is one thing that frightens fantasy owners more than a rookie who fumbles (because they inevitably lose their jobs, see Matt Jones), its a running back susceptible to having his touchdowns vultured by inferior backs.

Hunt showed good burst through holes, a solid north-south style, and good hands out of the backfield highlighted by his 78 yard explosion to put the Chiefs ahead for good early in the 4th quarter. Many all-pro level running backs will go seasons without a 58 yard run or a 78 yard reception, let alone having one of each in a single game, and certainly not in their debut game. The only downside is that just as Hunt had nowhere to go but up following his first touch, it seems likely that he has nowhere to go but down overall after his first game.

I’m not one to make snap judgements. I felt coming into the season that the Patriots would be Superbowl champions and one of, it not the best team in the NFL this regular season. On the other side, I felt Kansas City was primed for a regression. I was unimpressed by their offensive skill players outside of Travis Kelce, and felt that outside of some top end defensive talent in Justin Houston, Marcus Peters, and Eric Berry that the defense was lacking a solid middle class.

After one game it seems the opposite was true, that the Patriots were primed for a regression, and the Chiefs have the loaded high power offense. That being said, the key phrase is “after one game”. Lets not worry about the sky falling. Every fighter has a plan until they get punched in the mouth. Well, the Patriots just got punched in the mouth, there is little reason to believe they won’t pull themselves up off the matt and come back swinging.

In the meantime, there isn’t much to do except tip your cap to the historic performance put forth by the Chiefs. Its a long season, and its only just begun. Oh, and maybe send Andy Reid a few boxes of twinkies, he deserves a cheat meal after that game.