Yaaaaawwwwwnnnnn, well, after trudging through the boring Quarterbacks, and skill position guys we now get to the fun stuff. Team Defense! Woo Hoo!!!! Its like a party for your eyes.

We’re going to give you the top 10 fantasy defenses for this upcoming season. Keep in mind, this doesn’t mean these are the top 10 defenses in the NFL, but rather the top in fantasy. What’s the difference you may ask?

Well, if the Vikings defense gives up 25 points to the Patriots, and the Jaguars defense gives up 15 points to the Browns you could easily make the argument that the Vikings are the better actual defense in spite of giving up more points because they only gave up 25 to the Pats, while the Jaguars allowed the Browns to molest them for 15 points. But in fantasy its pretty clear cut, the Jaguars are the better defense. There is no adjustment for opponent. This isn’t golf where you have a handicap. If I score an 85 playing the local muni course while my buddy scores an 87 playing Augusta National, I win, no arguments.

With that in mind when reviewing team defenses you’re not only looking at who returns, who left, you improved, and who is declining, you’re looking at opponents. Every defense will play a challenging offense, the questions becomes, how often are they getting a powder puff?

That brings us to the top 10 fantasy defenses for 2017 (alphabetical):

Arizona Cardinals: Using their top 2 draft picks on defense while also adding veteran stalwarts Karlos Dansby and Antoine Bethea, the Cardinals boast a solid ballhawking secondary along with tough edge rushers in Jones, and Nkemdiche. 2 games each against the Rams, and 49ers doesn’t hurt either.

Carolina Panthers: It was Cam Newton’s MVP caliber play in 2015 that garnered all the attention, but it was the stout defensive play that got them to the Superbowl. The loss of Josh Norman hurt not only the overall play, but the identity of the secondary. The front seven though is as tough as they come. With opponents like San Fran, Buffalo, Chicago, the Jets, Vikings and the now Jay Cutler led Dolphins, its hard not to like the Panther’s potential for a fantasy rebound.

Detroit Lions: Davis and Tabor in the first 2 rounds of this years draft were nice moves. As were the additions of Akeem Spence and DJ Hayden. If A’Shawn Robinson can match the potential he flashed at Alabama, the Lions interior line play should be a point of strength. With 2 games each against the Bears, and Vikings, along with facing the Panthers, and Browns, that’s enough fluff to make the Lions an intriguing fantasy choice.

Houston Texans: The Texans lost a lot personnel wise, the retirement of Vince Wilfork, along with the defections of the John Simon and AJ Bouye, to divisional opponents no less, doesn’t help. But the Texans still boast a secondary littered with former first round picks as well as several studs in the front seven. As much publicity as JJ Watt receives, and as criticized as former number 1 pick Jadeveon Clowney is, Clowney is arguably the better player now… and Watt is still a stud. Games against the Jaguars (2), Chiefs, Browns, Rams, 49ers and Ravens are all favorable fantasy match ups.

Jacksonville Jaguars: I know, the Jaguars suck. But damn do they look good on paper. Lets see who they’ve added this off season: AJ Bouye, Calais Campbell, Barry Church, and Dawuane Smoot. Coupled with the maturation of 2nd year players like Myles Jack, Jalen Ramsey, and Dante Fowler, and all of the sudden the Jaguars could have something. Games against bland to poor offenses such as the Ravens, Jets, Rams, Browns, and 49ers doesn’t hurt either. 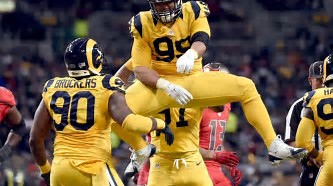 Los Angeles Rams: A couple new corners were nice additions, grabbing Tyrunn Walker from Detroit wasn’t bad, but by far the biggest acquisition the Rams made will end up being the addition of Wade Phillips as defensive coordinator. Aaron Donald, Michael Brockers, and Robert Quinn are going to wreck havoc upon the NFL with Phillips calling the shots. I don’t even care that one of the cream puff opponents (49ers) falls in the fantasy useless week 17 slot, the Rams will be one of the best real and fantasy defenses this year.

New England Patriots: The addition of Stephon Gilmore, along with retaining Malcolm Butler means the Patriots now boast one of the best cornerback tandems in the NFL. The ability to put 2 corners on an island will allow Matt Patricia to get very creative with his coverages, and blitzes. This team will continue to produce turnovers, and keep opponents out of the end zone. Playing the Jets, Bills, and Tannehill less Dolphins twice a year doesn’t hurt either. Toss in games against the starless Chiefs offense, and Carolina and the Patriots should be a fantasy producer.

New Orleans Saints: What? The New Orleans Saints? 4 defensive picks in the first 3 rounds of this years draft, the free agent acquisitions of Alex Okafor, AJ Klein, and Manti Teo should infuse the Saints with some strength on the defensive side of the ball. Add in the return to health of Delvin Breaux and the Saints should have a passable defense this year. Games against the Vikings, Panthers, Dolphins, Bears, Rams, Panthers (again) and Jets doesn’t hurt either.

Seattle Seahawks: Make no mistake about it, these are not your older brother’s Seahawks. This defense no longer strikes fear into the hearts of opponents. But they are far from weak. Pete Carroll will look to breathe new life into the careers of Arthur Brown, and Dion Jordan. Extending Kam Chancellor late in the off season was a big move too. With 2 conference games against the 49ers, and Rams the schedule provides some cushion too.

Tampa Bay Buccaneers: I may be a year too early on the Bucs, but I’m a believer in second year guys Vernon Hargreaves and Noah Spence. The offense will be productive enough to keep the defense rested, and Mike Smith is a high quality coach. Having your first 3 games against the Dolphins, Bears, and Vikings won’t hurt the young unit’s confidence either. By time they have to face Eli’s Giants in week 4 they may already be developing some swagger.

I’ve got two teams that were fantasy defensive stalwarts from whom I expect a slight drop off. The Kansas City Chiefs. While I still expect a solid pass rush, and some ball hawking from Marcus Peters, I think you’ll see an overall return to earth. The other team others are rating much higher than me is the Denver Broncos. They still have the cornerback trio of Talib-Harris-Roby, but I really think people are underrating the impact Wade Phillips had on this group, and I think he’ll be sorely missed.